We wrote earlier about "disaster tourism." Well another, related form of tourism that has been used by activists to generate what Stephen Duncombe has called an "ethical spectacle" as well as to galvanize and organize communities around issues of toxicity and environmental racism and injustice. I recently went on a short "Toxic Tour" in Champaign, Illinois, looking at how racism has negatively impacted the north side of the city disproportionately in both environmental and social ways, from police brutality to contaminated surroundings.
A new book by Phaedra C. Pezzullo from the University of Alabama Press is the first (that I'm aware of) scholarly book on the subject
Using guided tours as a form of organizing and educating like this is a tactic somewhat widely explored, so I thought I'd post a few examples that include artists and activists' work.
- Sharon Stewart's early 1990s "Toxic Tour of Texas" is probably the first I became aware of.
- Free Soil's "Gardening Superfund Sites Bus Tour"
- Invisible 5 audio tour of California's I-5 Highway
- Silicon Valley Toxics Coalition Toxic Tour
- Ground Work's (South Africa) Household Toxic Tour
- Baltimore Toxic Tour on Youtube
- The Southern California Communities for a Better Environment's Toxic Tours
- Toxic Tourism in Tucson (an article that includes comments by noted Environmental Justice scholar Robert Bullard)
- in San Francisco
Obviously there are more...
Posted by ryan griffis at 6:11 PM 4 comments:

One for the Road 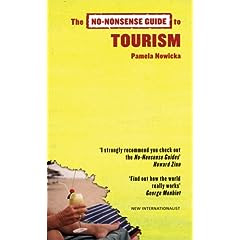 This pocket-sized softbound guide from the folks at The New Internationalist is not your typical travel book. It's a toughie. The No-Nonsense Guide to Tourism takes a harsh look at the often invisible impacts of global tourism and challenges readers to think about some of the big picture effects that travel has on the world. It basically demystifies one of the biggest industries in the world by examining things like labor conditions, the role of travel and vacations in western cultures, and trends like the popular gap year.
from Gadling
Posted by ryan griffis at 3:05 PM No comments:

Tourism in the Control Society

The Smart Mobs Blog points to a text about a biometric scanning program at JFK Airport called Clear, created by a company named Verified Identity Pass. It also pointed to a Register piece about a UK push for collaborative biometric surveillance with the US.

The Clear program shows how biometric technology is being developed to extend the automatic delegation of privileges we currently find in private toll roads, where those with access to early technology and financial capital benefit from better maintained roads and less traffic. Only here, passengers that pay the $99.95 per year fee, and submit data linked to fingerprints and iris scans, will be able to pass through security points without the lines and searches most of us now go through. Clear, offers to get its customers in the "fast lane," but a fast lane necessitates a "slow lane." This is what geographer Stephen Graham and others have termed "software sorted geographies," spaces of privilege that are managed and regulated by computer systems. Of course, this can easily fall into the trap of technological determinism, but the materialist nature of the critical observations are equal to the futurism/determinism here I think.
Posted by ryan griffis at 1:27 AM No comments:

In On the Beaten Track, Lucy Lippard discusses what she calls "disaster tourism," describing those travels to sites like the nuclear test ranges in the US Southwest and sites of famous fires, earthquakes or other catastrophic incidents - certainly Ground Zero in NYC would fit into her conception.
Browsing through some tourist/travel-blogs today, I came across a post about a horrible accident at the Six Flags Kentucky Kingdom. That post pointed to a website dedicated to amusement park ride accidents, appropriately called rideaccidents.com. The site bills itself as:

This kind of disaster e-tourism could also include the popularity of war-related blogs that serve voyeuristic desires as much as they do the desire for more on-the-ground news. Of course, these simultaneous desires mirror the complexity of desires that play out in conventional forms of tourism, for authenticity and the exotic.
Posted by ryan griffis at 12:30 PM No comments:

Members of the US Congress are proposing an electronic monitoring system for travelers coming into the US from currently visa-waived EU states. The descriptions sound like it would function through a "ping" sent to security officials when travelers purchased their plane tickets... but there is also mention of a biometric process. From an International Herald Tribune article:

"It's really a 21st-century model," said James Carafano, a Heritage Foundation analyst who specializes in homeland security. "It'll all be done electronically and biometrically. And it really doesn't compromise your privacy."

Sounds like an air travel parallel to the SENTRI program in place at certain points in the US-Mexico border. These developments point to the development of surveillance technologies not so much as a method of discipline (i.e. catching "bad guys") but as a form of submission and convenience for those privileged enough to be mobile on a global scale.
Thanks to Marc for alerting us to the story!
Posted by ryan griffis at 10:55 AM 1 comment:

For those interested in travelogues and trying to avoid flying, The Guardian has a column called "The Slow Traveler," by Ed Gillespie, who's traveling the world without taking any flights. Reminds me of the recent string, well 2 at least, of books on trying to eat in a manner aware of food miles - like not eating anything from more than 100 miles away.
Posted by ryan griffis at 8:07 PM No comments:

Aileen, on the Furtherfield blog, recently wrote a rant on the rather irrational situations that air travelers regularly subject themselves to. She also asks a few related questions:

Once upon a time, air travel was glamorous, exciting, something different from everyday ordinary life. Wasn’t it? I think that’s what I remember from my childhood, that’s what it looks like in old films. So how did air travel come to be a form of mass transportation? And an increasingly unpleasant form of mass transportation at that? In fact, I am beginning to suspect that more sinister forces are somehow at work here. I have started developing my own personal conspiracy theory about it.

Her questions about airports got me thinking about a project from a while back by Martha Rosler entitled "In the Place of the Public." (find images here) Grant Kester has a short write up about it here, in which he says:

Rosler offers another way to map the airport, not as the adventurous travelers of the jet-age, but as alternately bored and frightened consumers. In her photographs the airport appears like a strange undersea world, filled with a leaden atmosphere, mysterious lights and sounds, and endless subterranean caverns.

While there is lots of theory and discussion of mobility, placelessness, non-places and interstitial modalities involving airports, I recently received an email about a bicyclist that was harassed and beaten by police when leaving an airport terminal on his bike. There's something interesting about the extension of airport security into the surrounding transportation landscape here that has to do with speed and the control over one's own mobility. It also reveals that the move into a society of control, where rules are enforced by means of preemptive design and architecture isn't a complete process. Meat cops will still show up and tase you if you do something unexpected... like ride a bike away from an airport.
Posted by ryan griffis at 7:34 PM No comments:

An Atlas of Radical Cartography

A new tool for critical tourism, or just people interested in mapping... NY based artists/writers Lize Mogel and Lex Bhagat are putting together an Atlas of radical Cartography. What is that, you ask:
"An Atlas of Radical Cartography pairs artists, architects, designers, and collectives with writers to explore the map’s role as political agent. These 10 mapping projects and critical essays take on social and political issues from globalization to garbage. An Atlas of Radical Cartography will be an important addition to the tremendous cultural momentum that links art, design, geography and activism through maps.
It will be published in Fall 2007 by the Journal of Aesthetics and Protest Press, Los Angeles, at a cover price of $25.00. Concurrently, an exhibition of the maps, titled “An Atlas,” will tour nationally. Participants include mapmakers / essayists:
An Architektur / Sebastian Cobarrubias, Maribel Casas-Cortes on migration in Europe;
Center for Urban Pedagogy / Heather Rogers on garbage flows in New York City;
Ashley Hunt / Avery Gordon on the global prison-industrial complex;
Institute for Applied Autonomy / Tad Hirsch on surveillance and “tactical cartography”;
Pedro Lasch / Alejandro DaCosta on migration in the Americas;
Lize Mogel / Sarah Lewison on geography, gentrification, and globalization;
Trevor Paglen & John Emerson / Naeem Mohaiemen on extraordinary rendition;
Brooke Singer / Kolya Abramsky on the contradictions of cheap energy in the US;
Jane Tsong / Jenny Price, D.J. Waldie, et al, on human impacts on LA’s water ecology;
Unayyan / Jai Sen on mapping the unintended city in 1980s Calcutta. "
Posted by ryan griffis at 10:47 AM No comments:

The Institute for Applied Autonomy have set up a fictional tourist (Terminal Air) agency based on the CIA's extraordinary rendition program. Based on their collaboration with artist-geographer Trevor Paglen, the installation "attempts to envision the CIA office cum-travel agency in Langley, Virginia from which the Extraordinary Rendition Program is presumably coordinated."
Posted by ryan griffis at 8:50 PM No comments:

The Travel Office is participating in an exhibition called Pavement Paradise at the Center for Land Use Interpretation in Los Angeles that began June 1. Included in the show is the Travel Office's Parking Public video tour into the politics of parking in the United States.
Posted by ryan griffis at 8:45 PM No comments: