I was recently made aware of this initiative (thanks Nick!) in California by the Physicians for Social Responsibility. Their "Military Tour of Southern California" looks at the military industrial complex in the region in order to discuss its impacts on the wider world as well the very near health of locals and workers.
While this tour fits into the critical tourism that the Travel Office is interested in, linking environmental justice and global militarization concerns, this got me thinking more about how such histories lend themselves to touristic imaginings.
I'm not interested here in what is referred to as "war tourism," where tourists are looking for danger and adventure in conflict zones... that will have to be a separate post.
A friend of the Travel Office, Trevor Paglen, has been exploring the largely unknown (to most of us anyway) landscapes of secret military programs, sometimes taking people out into the deserts of the US Southwest where most of them are located. This first hand experience of the sublime landscape combined with knowledge about the equally sublime amount of money being spent on them in search of ever more sublime methods of control and destruction is key to his work. Film maker Bill Brown's "Buffalo Commons" that takes a poetic look at decommissioned missile silos in the Dakotas and their intersection with depopulation also comes to mind.
The Cold War has its off-the-beaten-track sites, as well as the more accessible museums, monuments and guided tours around the world for military buffs, historians, political partisans and cultural analysts.
What will the second major ideological war of modernity (or post-modernity, if you like) - the "War on Terror" - produce in the way of touristic experiences?
Sure, some in the US might already see the memorial to the the destroyed World Trade Center as the first official version. Like the Cold War, where monuments to capitalism as the "winning" ideology dominate, there can be little doubt that sites of memory in the "War on Terror" will be simplistic in their depiction of conflict - a "with us or against us" representation of events.
Some critical tourists/artists/geographers/etc have begun exploring the spaces of the "War on Terror", at least trying to give us a more complex view of what is going on:
As already mentioned Trevor Paglen has been looking into the geography of the US military.
Tony Chakar's "Catastrophic Spaces" - an audio tour through East Beirut
You Are Not Here - a psychogeographic tour of NYC and Baghdad and Gaza/Tel Aviv
An Architektur has looked at the Juridical-Political Spaces in the "War on Terrorism"
The Institute for Applied Autonomy's (with Trevor Paglen) "Terminal Air" - the airspace of extraordinary rendition
Angie Waller's "Ebay Longing" looked at the trade in goods from Afghanistan and Iraq on Ebay.
Posted by ryan griffis at 10:50 PM 2 comments: 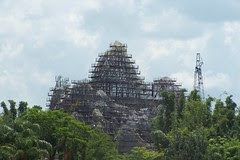 Someone recently sent us a link to an article on the ACM Siggraph site titled "From Myth to Mountain: Insights into Virtual Placemaking" by a senior vice president and creative executive of Walt Disney Imagineering. In it, the author discusses Disney's Animal Kingdom and Expedition Everest and the manner with which Disney has created places using story-telling methods. In introducing what he means by story telling, the author states:

Narrative space is theatrical space. What matters are not the functional realities of the buildings and landscape, but their use as language to communicate ideas. Theatrical space exists only in the viewer's imagination and is shaped only by story.

The experience of the space is described in terms of the conceptual narrative as experience, where "in the public environment of narrative space, the guests' real physical bodies are all moving inside the imaginary narrative space."
Of course, the narrative space being created is a very familiar one for Disney, and one that they've mined for countless stories - colonialism. The Animal Kingdom puts viewers in the role of a safari participant, now interested in preserving wilderness in the form of parks rather than trophy heads on a wall. It is less civilized people - poachers - against whom the Animal Kingdom must be protected. 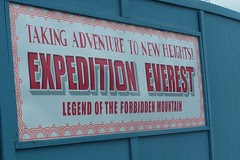 Likewise, Expedition Everest is a "a high-speed adventure ride into the Himalayas to confront the yeti, the legendary abominable snowman." Yes, an abominable snowman. And yet again, visitors are put in the role of adventure seekers, this time, mountain climbers of course.
While criticisms of these narratives are perhaps too easy, after all, these are the narratives upon which Disney has built its empire, there is another kind of colonization at work - the very non-virtual colonization of space within which their narratives play out. As the author notes, the visitors (or as Disney calls them "guests") do not leave their physical bodies behind when they enter Disney's stories. Their bodies are moving, not just "through the imaginary narrative space," but also through the Disney-constructed environment. The food people buy at Disney is not imaginary, the people serving Disney's "guests" are not imaginary, the money being exchanged is not imaginary. And neither are the very real political and social impacts of Disney's narratives. 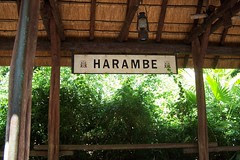 What are we touring when we tour a Disney version of the Himalayan Mountains, or a Swahili village constructed in a Florida resort for our amusement? How does this educate us (U.S) to think of the rest of the world in a way other than as a theme park?
pictures from happysteve.
Posted by ryan griffis at 5:23 PM No comments: