A Tokyo-Mumbai remix from the folks at Airoots.org.
Posted by ryan griffis at 7:56 PM No comments: 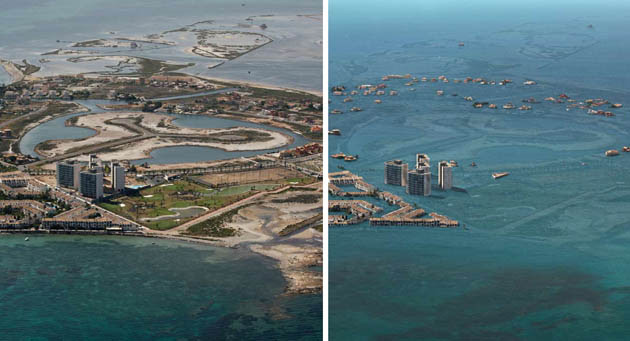 Relating back to our recent thoughts about sci-fi tourism, the great BLDGBLOG has a recent post about the intersection of apocalyptic visions of climate change and science fiction-enabled escapism. Using a series of photos by Pedro Armestre and Mario Gomez, made for Greenpeace, the post discusses the affective qualities of these graphic visions of rising sea levels, and what they may actually produce in segments of our Hummer-driving, bottled water drinking, Wii playing culture. Possibly a vision of the "adventure tour of a lifetime" rather than the desire to change the situation?
Our two-cents is that these depictions represent a future to come in a way that might be more handy for planning for such a scenario than convincing anyone of how or why to change policy. As Paul Virilio has written (and we paraphrase): ecological disasters are only a problem for civilian populations... for the military, they are an opportunity. And as more of our civilian infrastructure and leadership becomes militarized...
[Image: By Pedro Armestre and Mario Gómez via BLDG BLOG].
Posted by ryan griffis at 8:40 AM No comments:

Parking With the Stars 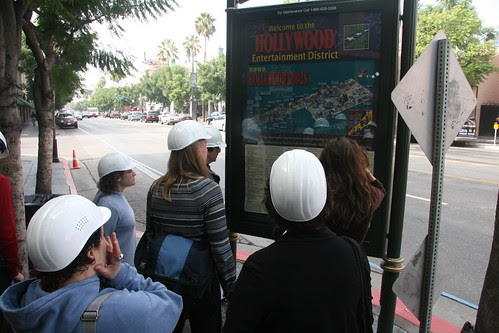 The Travel Office just conducted a Parking Public tour along, and behind, Hollywood Blvd as part of the amazing Just Space(s) exhibition at Los Angeles Contemporary Exhibitions (organized by Ava Bromberg and Nicholas Brown). We visited a former parking lot that is undergoing its transformation into a high tech Madame Tussauds Wax Museum and a traffic triangle that a neighborhood organization is trying to beautify and rid of pigeons.
This tour comes close on the heels of another tour we led in Champaign, Illinois looking at the transformation of its municipal parking infrastructure into more lucrative spaces for consumption. In both, despite the overwhelming differences between Hollywood and Champaign, we are seeing similarly massive changes in how parking fits into the utopian visions of city officials and developers.

Posted by ryan griffis at 8:36 PM No comments: 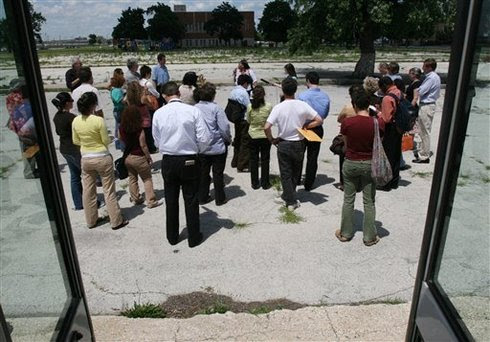 We can't believe that we haven't come across this before, given our main office's location just south of Chicago, but we were recently pointed to Beauty Turner's Ghetto Bus Tours in Chicago. Ms. Turner is the assistant editor of the public housing newspaper Resident's Journal and has been leading such tours since 1999. This NPR interview discusses the audience for the tours, the perceptions of those living in the housing projects and the policies that are leading to the relocation of residents in Chicago's public housing in some very disturbing ways.
For more info on the ongoing housing war in Chicago check out the friction institute.
top image from Stacie Freudenberg, AP
Posted by ryan griffis at 11:59 PM 9 comments:

We recently acquired a book titled Ecofiction (thanks) from 1971 edited by John Stadler, with shorts by Bradbury, Ballard, Poe, Asimov and others. An interesting mix of possible futures from the horrific to the mundane. Standouts includes Poe's account of Earth's end by a comet that ignites the globe through an unexpected chemical reaction, the excruciatingly cramped existence of a family in a world where pharmaceuticals keep people from aging and dying by Vonnegut Jr., and a story of insidious subliminal advertising by Ballard. Interesting how many of these stories from well before the 1970s manage to resurface in new ways today.
In much more utopian terms, we also recommend Ernest Callenbach's 1975 Ecotopia - a vision of a US Northwest that has successfully separated itself from an ever waring and polluting United States. It has its sexist moments, so be warned if you haven't read it already.
However, our favorite tourist excursion into the near future through literature so far has been Octavia Butler's Parable of the Sower. Parable is an extremely powerful tale of a young woman in Southern California during a global social and environmental collapse that creeps up slowly, invading normalcy rather than a sudden Day After Tomorrow catastrophic scenario. A horrific as the scenes Butler creates are, it remains critically hopeful. Told mostly in first person narration, it is a great read for people who like guided tours.
And to close, a more updated near future tour of a mid-climate change London created by art-research collective Platform called And While London Burns. This story takes the form of an operatic audio-tour meant to be experienced in the current space of the future story. We haven't had that experience of the tour, but it's a quite listenable work nonetheless. The great Mute magazine has an interesting critical review of AWLB.
Posted by ryan griffis at 10:49 PM No comments:

Monbiot recently made a post that was inspired by Cormac McCarthy's book "The Road" and the apocalyptic horror of the human condition in times of catastrophe. While we haven't read the book, it sounds like a gruesome account of a post nuclear holocaust in which all life except humans is extinguished. (No mention of roaches).
This got us thinking about the role that sci-fi plays in touristic terms - it provides us a way of touring the future, whether of the Disney utopic variety, or the Children of Men dystopic variety.
Posted by ryan griffis at 2:46 PM No comments: