Touring Protest, Or Maps of Protest 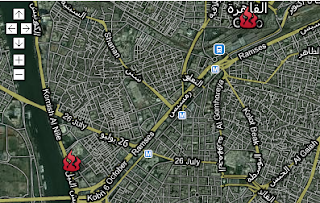 Following some of the reporting on the protests in Egypt by Aljazeera, we came acrossthis story that portrays the protests through maps.
Without getting into the problematics of this form of mapping and its rendering of space-time relationships as flat and simultaneous, we'd like to just think about the image of the map we are presented with. While maps have probably always included iconography as part of their pictorial funtion, the ability for the map's readers to change the scale of the map makes the role of virtual map pins (like those in Google Earth) more visible... maybe. At what scale is the location in question identified by the map pin? The image below suggests that an event took place in the middle of a street, perhaps at the scale of a building. If you zoom back enough, however, the whole city is on fire. Can one understand the spatial distribution of protest by locating where its most visible events erupt? Is protest simply the events where direct confrontation occurs? And how does this kind of mapping portray the role of the state in such confrontations?
So, we've set this up as if we have answers, but we don't. Instead, we'll continue playing the tour guide and point to a few other places to look.
The image of a city on fire, depicted from space, immediately recalled Mike Davis's description of the 1992 LA uprisings as "seen" by satellite. Davis made the observation that, from space, the difference between a "natural disaster" like a forest fire and a political one, like the LA uprisings, is difficult to discern. The point being, not that the events of April 1992 should be considered "natural", but that so-called "natural disasters" facing Southern California should be considered political.
In the book Mapping Tourism, cultural geographer Rob Shields, discusses the role of mapping in creating an imaginary of protest and dissent, using the 2001 protests during the Summit of the Americas in Quebec.
And finally, media scholar Lisa Parks dissects the role of tools like Google Earth in portraying geopolitical events like the "Crisis in Darfur".
Posted by ryan griffis at 2:26 PM No comments:

Taking in the Sights

Dean MacCannell's "The Ethics of Sightseeing" will be out later this year, and the University of California Press website has the first chapter available for preview.
It seems MacCannell will take on the relative shallowness of most "tourism studies":

We know little more today about tourist experience and tourist subjectivity than we did thirty years ago. Tourism researchers conduct surveys, form and test hypotheses, undertake ethnographic field studies, and make mathematical models. They seem to assume, in Goffman's words, "If you go through the motions attributable to science, then science will result."

MacCannell also seems to be offering a challenge for the practice of tourism, along with furthering his analysis:


Sightseeing can shift the foundations of existence and, as Stendhal never fails to remind us, establish new possibilities for shared subjectivity. This sharing is not limited to exchanges between tourists and their hosts. It extends to every relationship an ethical tourist will ever have.

This, of course, reminds us of one of our early influences, Gregory Ulmer and the Florida Research Ensemble. Here's a video of Ulmer discussing some of those initial concepts.

Posted by ryan griffis at 5:49 PM No comments: