Taking Earthwork to the Streets of Chicago 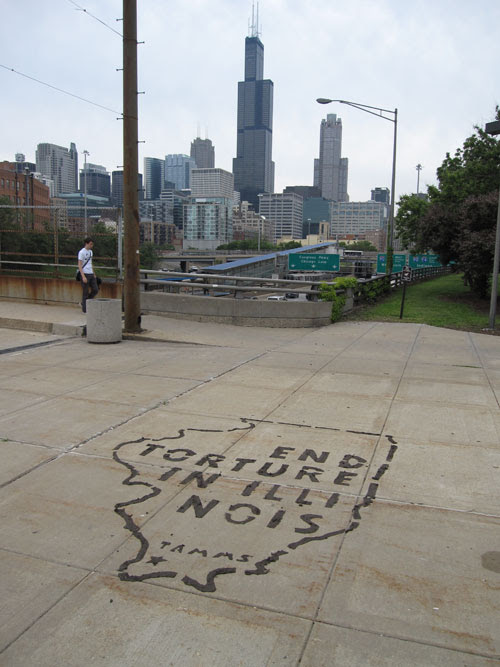 Some colleagues from Chicago and around the midwest recently completed a political street stenciling project in support of the Tamms Year Ten Campaign. Tamms is shorthand for a supermax prison located in a town by the same name that has been operating under conditions considered torture by many human rights organizations and Tamms Year Ten is a grass-roots campaign to bring attention to it and at least bring it back to its original, legal mandate. As you can see from the pictures, they created an outline of the state of Illinois locating the location of Tams within in. To make the image they used giant stencils and mud, a technique learned and borrowed from artist Jesse Graves. Chicago-based art historian and writer Lori Waxman has written on the action, discussing the relationship between the stencil action and the issue of Tamms in more detail.
image above from Jesse Graves' blog.
Posted by ryan griffis at 9:20 AM No comments:

Looks like a road being constructed for the 2012 Games in London has been built atop a mysterious, ancient mass grave, speculated to be the remains of Britons killed by invading Romans. From Reuters.
Posted by ryan griffis at 4:45 PM No comments:

We have been following (of course) NPR's Anne Garrels' coverage of the build up to the 2014 Winter Games in Sochi, and other reports about the economic situation there. Of course, the official Russian line is that everything looks good, and the Olympics are being touted as the means to convert Sochi into a world-class resort town, with all the amenities it currently lacks.

We also ran across this Denver Post article on a Kansas City firm named Populous (formerly HOK Sport Venue Event) and their role in designing Olympic venues (along with other mega sporting facilities). Apparently, the firm has been involved in every Olympic Games since 1996, including the Chicago 2016 bid and the upcoming London and Sochi games. The firm is responsible for projects like the Autodrome in Dubai, design for the 2008 Democratic National Convention in Denver and the new Yankee Stadium.
For anyone wanting to follow the role of construction in mega sporting events, we highly recommend Neil deMause & co's blog (and book) Field of Schemes.
image above: Populous' designs for London 2012 Olympic Stadium.
Posted by ryan griffis at 9:53 AM No comments:

We'll be giving a presentation on June 25 at the Orientation Center in Chicago, as part of the Public Culture Lecture Series organized by InCubate and Randall Szott.
We will be talking about some newer developments and projects as well as discussing our broader interest in tourism as a form of public critical culture. Perhaps a teaser image from a recent project will entice you into coming?

Posted by ryan griffis at 12:00 AM No comments: 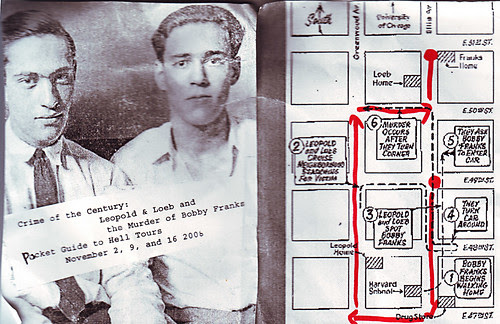 We've posted before about the walking tours by Paul Durica (aka Pocket Guide to Hell) of the "Crime of the Century" - the infamous Chicago murder of Bobby Franks by Leopold and Loeb. We've since been in touch with Paul, who also lead a tour recently titled "A Working Man's Guide to the World's Columbian Exposition", an exploration of the 1893 World's Fair in Chicago. While we haven't been on one of Paul's tours (yet), we're really excited by them and hope to have the pleasure of touring Chicago with him soon.
Perhaps we'll attend his next Crime of the Century tour which will be June 7 at 11am, starting at the corner of 49th and Ellis in Kenwood (the tours are free, but Paul would really benefit from $5 donations). Email him to reserve a spot.
And read up on Paul's tour to see what you're in for.
image from Distances Between Ports
Posted by ryan griffis at 5:17 PM No comments: