The New York Times' Frank Jacobs has a great post on the Borderlines blog about the fallacy of the straight border between Canada and the US, noting that the clear-cut demarcation "deviates from the 49th parallel by up to several hundred feet." It proceeds to deliver an abbreviated history of how the border became what it is today, and that rather than one giant straight line, it's a series of smaller straight lines between a series of border monuments. It concludes with a remark on how colonial forces along the 49th parallel (in Russia's Far East and North America) have created these imaginary lines, with very real consequences, at the detriment of indigenous peoples:


Another (ahem) parallel: Both sets of powers divided the territories between each other irrespective of the native peoples present in those areas. In the case of Sakhalin, Japanese/Russian occupation was disastrous for the Ainu, Gilyak and other local tribes.
In the 1870s, Sioux fleeing the might of the United States Army provided the straight part of what is now sometimes known as “the longest undefended border in the world” with its most poetic epithet. Seeing how an invisible force seemed to stop the American cavalry dead in their tracks, they called that imperfectly demarcated boundary the Medicine Line.

Posted by ryan griffis at 1:19 PM No comments:

We just picked up the new book by our friends' at AREA Chicago, Notes for a People's Atlas: People Making Maps of Their Cities, which we strongly encourage anyone reading this to check out. The book contains a collection of maps of Chicago (as well as a handful of other cities and neighborhoods from around the world) made by residents, visitors, activists, artists and others, along with short essays that provide some historical context for informal and artistic map making.  The Notes for a People's Atlas project began 7 years ago, facilitating the mapping from below of the city of Chicago. One thing that emerges from the collection of rather random mappings of the city (from the politically motivated to the idiosyncratic and comedic) is an understanding of how much our spatial understanding of where we live has to do with how we live in it and what we imagine is possible. 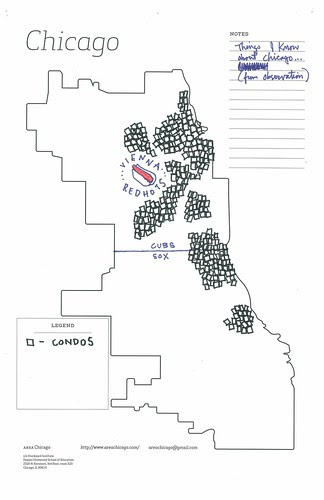 The People's Atlas starts by asking people to mark up blank maps, and it becomes extremely clear that what remains blank in the maps produced is as important as what gets filled in. Through the process of mapping what is known, we also map what isn't known. How can we deal with gaps in individual and collective experience if we don't know those gaps even exist? The immediate, micro moments that define our everyday lives (where we eat, go to school, or get unnecessarily harassed by the police as one map narrates), put into the space of a map, can be projected onto the social fabric that is woven from the experiences of those surrounding us, whether we know them or not. The individual maps in People's Atlas give us an incomplete visual index of a city that isn't some kind of static, naturally defined terrain, but rather is a living entity with permeable boundaries. Various entities flow in and out of its walls, not unlike genetic material breaching cellular walls, struggling to make it a habitable place. Notes for a People's Atlas, encourages us to make this a more just process, realizing in maps our connections to others who are also fighting to make the city inhabitable.
Posted by ryan griffis at 5:24 PM 2 comments:

Disaster Tourism is for the Birds

Thanks to the Atlas Obscura blog, we came across this story about several species of birds (Tiger Bittern, Black Bittern, Little Egret, Pond Heron, Indian Pitta and Kingfishers) that plunge to their deaths in Jatinga, India. Apparently, it's not the descent that kills the birds, but the people on the ground. Conservationists and wildlife advocates have been working on figuring out what the cause of the birds' behavior is, and stopping the killings (deaths have supposedly dropped by 40%) At any rate, a tourism agency for the state of Assam is attempting to turn the phenomenon into a tourist attraction.
We should probably apologize for the horrible pun in this post's title.
Posted by ryan griffis at 4:02 PM No comments: