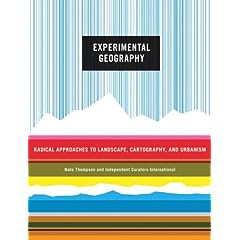 Experimental Geography, the touring exhibition organized by Nato Thompson, has a catalog set to release this coming January. Since the Travel Office contributed a map to the "We Are Here Map Archive" component of the show (organized by AREA Chicago's Daniel Tucker), we received an early copy.
It's a really great publication in many regards. To start with, there is the full color reproduction of so many great projects, including Bureau d'etudes, Center for Urban Pedagogy, LA Urban Rangers, Hackitektura, subRosa and more. Then essays by Thompson, Trevor Paglen and Jeffrey Kastnor, supplemented by short contributions from Matt Coolidge, Iain Kerr, Damon Rich and Lize Mogel that introduce the works in the exhibition. One can always ask for more from a publication of this sort - there will always be gaps of some kind - but it really works as a concise collection of projects and contextual history/theory for beginning to consider where these practices might point for further development.
See also: An Atlas of Radical Cartography.
Posted by ryan griffis at 10:52 PM No comments:

This is a bit dated, but we recently revisited our Invasive Irrigation Kit project from a few years ago for a really great exhibition (curated by Christa Donner and Andrew Yang) at Chicago's Gallery 400 called Biological Agents. We say outdated, because the exhibition ended on November 22.
However, you can still get quite a bit of information from the exhibition web site, hosted by Ms. Donner.
The Kits were included in a mini exhibition within the exhibition titled Knowledge Virus, a collection of distributable projects including zines, stickers and other such things, like the Invasive Irrigation Kits. Some of our favorite items were the zines by the Small Science Collective and the love letter to the Hepatitis C virus by Caitlin Berrigan (who was in the primary exhibition along with Natalie Jeremijenko and Brandon Ballengee).
We produced a new poster that discusses the questions of "native" versus "invasive" species and Brassica juncea, a type of mustard that is considered invasive in most of the US but is also widely used as a food and spice (seeds of this plant are distributed in the kits).
And we have a few left, so if you'd like one, we'll send one to you (while supplies last) for the cost of packing and USPS Priority postage - (5USDin the US, 12USD International). Order via Paypal (see the bottom of this page).
Posted by ryan griffis at 5:18 PM 1 comment:

A colleague just sent us a link to a post on the Strange Maps blog that juxtaposes a 2008 presidential electoral map (by county) and an 1860 map of cotton production. The comparison reveals a correlation between the production of cotton in the antebellum South and counties that voted for the Democratic candidate. The obvious conclusion is that a higher concentration of African Americans would have lived in cotton producing regions, and that they continue to live in those same areas in high numbers today.
It turns out that the comparison was originally made by Allen Gathman a professor in Biology at Southeast Missouri State University. The Vigorous North Blog (A Field Guide to Inner-City Wilderness Areas) followed up on Gathman's comparison, noting the geological origins of the soil that made certain areas better for cotton growing.
Obviously this conclusion would have been made easier with simple census surveys, but this particular juxtaposition makes visible the combined narratives of geology, slavery and the contemporary intersection of race and space that the census does not take into consideration.
As our friend remarked when pointing us to the link, a larger question may be one of mobility.
Posted by ryan griffis at 3:12 PM No comments:

It's a beautiful Saturday afternoon in Bucks County, Pennsylvania. Kids play, dogs bark, lawnmowers growl, and I’m standing on a faded welcome mat, worrying about the politics of the porch. There's no doorbell. Do I knock on the screen door or should I open it and knock on the actual door? Should I address the person by name? It's written right here on my map, along with her age and party affiliation. I knock hard on the screen door frame and decide to stick with Ma'm. If a stranger knew my name, it would frighten me. Feet shuffle, voices mumble, and an elderly woman in a house dress answers.

"Hi, I'm a volunteer with the Obama-Biden campaign-"
"Go! Just go! Get the hell away from me!"

Posted by ryan griffis at 1:07 PM No comments:

Rooms With a View is an archive of photos from the inside of hotel rooms, by Hetherington.
Posted by ryan griffis at 12:49 PM 1 comment:

Yes We Can... Travel

The Travel Geography blog has a list of stories on how the Obama election is impacting tourism. Like this:

From the Telegraph: 80 per cent of readers are more likely to visit the US now than they were before the presidential election. Until now many Telegraph readers have said they have been put off the US by its draconian border security arrangements and the foreign policy decisions made by George Bush.
Or the Wall Street Journal: Despite some rates surpassing the $1,000 per night mark, rooms are also booking, on average, three times faster than for the last inauguration, according to the travel Web site Expedia.com. Many hotels have imposed two- and three-night minimum stays.

It will be interesting for sure to see how the economic crisis will intersect with the political enthusiasm going into the Obama presidency.
Posted by ryan griffis at 12:06 AM No comments:

One of our favorite forms of tourism is the speculative near future narrative, both utopian and dystopic. Some of our favorite people, who will eventually no doubt be revealed, have produced a fully simulated copy of the New York Times and released it to the public this morning - only it's a simulation of the paper from July 4, 2009. Below is the press release following its, um, release.

Early this morning, commuters nationwide were delighted to find out that while they were sleeping, the wars in Iraq and Afghanistan had come to an end.

If, that is, they happened to read a "special edition" of today's New York Times.

In an elaborate operation six months in the planning, 1.2 million papers were printed at six different presses and driven to prearranged pickup locations, where thousands of volunteers stood ready to pass them out on the street.

Articles in the paper announce dozens of new initiatives including the establishment of national health care, the abolition of corporate lobbying, a maximum wage for C.E.O.s, and, of course, the end of the war.

The paper, an exact replica of The New York Times, includes International, National, New York, and Business sections, as well as editorials, corrections, and a number of advertisements, including a recall notice for all cars that run on gasoline. There is also a timeline describing the gains brought about by eight months of progressive support and pressure, culminating in President Obama's "Yes we REALLY can" speech. (The paper is post-dated July 4, 2009.)

"It's all about how at this point, we need to push harder than ever," said Bertha Suttner, one of the newspaper's writers. "We've got to make sure Obama and all the other Democrats do what we elected them to do. After eight, or maybe twenty-eight years of hell, we need to start imagining heaven."

Not all readers reacted favorably. "The thing I disagree with is how they did it," said Stuart Carlyle, who received a paper in Grand Central Station while commuting to his Wall Street brokerage. "I'm all for freedom of speech, but they should have started their own paper."
Posted by ryan griffis at 9:57 AM No comments: