While Congress is searching for an easy answer for the fuel crisis, many US citizens are heading to Mexico as, what the NY Times has called "gas tourists," due to the still lower pump prices there resulting from government subsidies. Driving further to get cheaper fuel seems like such an "American" tradition. Of course, if you're in New York, you just cross the border to Jersey.
This also reminds us of the different forms of medical tourism (which we have posted about here before), where often wealthy tourists travel for lower cost procedures, or in some cases treatments not available at home.
See our friend Ricardo Miranda Zuniga's investigation of dental tourism along the US-Mexico border.
Posted by ryan griffis at 1:04 PM 13 comments:

A much better take on whiteness studies than the "What White People Like" cultural fluff... but we're sure Macon D won't get a book offer out of this blog.
Posted by ryan griffis at 12:56 PM 2 comments:

Our friend, experimental geographer and artist, Trevor Paglen is showing some new work in Berkeley related to his ongoing investigation of all things secret and hidden in the world of the US Military. This time it's a look at the Earth's "secret moons" a.k.a. classified satellites. For the last couple of years, Trevor's been working with amateur astronomers, like these folks, and some artsy computer folks to track and photograph these things, which sounds like no small feat.
Also, see Wired's brief write up of the work.
Posted by ryan griffis at 12:03 AM No comments:

You take one part psychogeography, one part mass observation, and sprinkle liberally with condensed data mining, stir with latest GPS enabled communication device (Blackberry or iPhone preferred). Combination will become a doughy substance called "reality mining".
Caution, may rise too fast and deflate unexpectedly.
OK, enough with the silly metaphors (sorry food is on our minds). "Reality mining" is described by its founder, Sandy Pentland, of MIT:

The science behind reality mining is that subtle patterns in how we interact with other people reveal our attitudes toward them. These biologically based “honest signaling” mechanisms, including a person’s activity level and how the timing of their actions is influenced by others, offer an unmatched window into our social life, intentions, and health. By understanding these subtle patterns we can better understand ourselves, and begin to engineer our society to be a happier, more human place to live...

Locative Media meet genetic determinism. Apparently a "right to the city" isn't as important as a profitable index of it in these people's utopian vision of a "more human place to live."
The real beneficiaries of the US Government's requirement for all mobile phones to carry GPS location awareness are becoming more and more apparent.
Posted by ryan griffis at 11:19 PM No comments:

The NY Times has a great Op-Ed on the current problems with the banana industry. While it talks about the coming price jump (estimated to over $1/pound) due to floods in Central America and the rising cost of fuel, the more interesting story is the likely decimation of the variety of banana we in North America and the EU think of as THE BANANA. Apparently, the banana variety we consume is a Cavendish (a Chinese variety) that became the staple for industry in the 1960s, after the previous staple, the Gros Michel, was wiped out by a fungal epidemic. Now, a more virulent form of this fungal disease is attacking the Cavendish variety, which was previously immune.
Why is this significant, well for starters, pretty much the entirety of the banana industry is monopolized by the singular genetic variety Cavendish. Already, the effects of the disease on Asian plantations has been significant, and scientists speculate that it will hit Latin America sometime in the next 5-20 years.
Both traditional forms of cross-breeding and genetic engineering are being employed to create resistance and edible replacement crops, but the problem that cultivated bananas have become a monoculture cash-crop, and one that can't even reproduce on it's own (they don't produce seeds) will most likely just be repeated with whatever is designed to take the Cavendish's place. With the combination of factors facing the well-traveled banana, we'll see if it remains one of the developed world's favorite fruits much longer.
image above: map of world banana production
Posted by ryan griffis at 1:13 PM No comments: 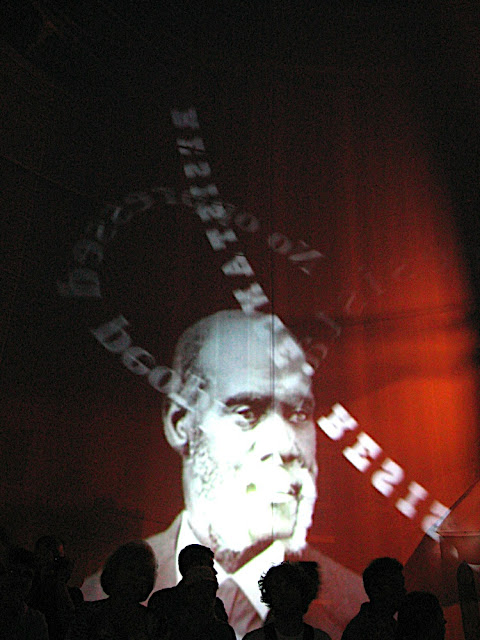 We would have loved to witness this event, organized and created by our friends in Troy, NY.
Here's what they have to say about Spectres of Liberty:

Spectres of Liberty is a public memory, site-specific art project. Beginning with a sense of loss about the changing built environment of Troy, New York, we set out imagining ghosts of demolished buildings and structures. Through imagining inflatable sculptural extensions to buildings whose facades have been destroyed to thinking about recreating vanished historic sites, we decided on creating a ghost of the Liberty Street Church.
The Liberty Street Church is not only significant as a vanished part of Troy's architectural history, but also for its value as a historic site in the fight to abolish slavery. From old photos of the site provided by the Rensselaer Historical Society, we created an inflatable 1:1 scale reproduction of the church and will install it at the former site of the church, which is now a parking lot. We will be animating this ghost church through video projections that call forth the history of the site, as well as through the social context of a cultural event that will bring community members to the site to think more deeply about the space and its history.
Through our research we learned more about Henry Highland Garnet, the pastor of Liberty Street Church from 1843-1848. He was known around the world for his militant orations and publications calling on people to actively participate in the fight to end slavery. When we read Henry Highland Garnet's words from the 1840's: "Let your motto be resistance! resistance! resistance! No oppressed people have ever secured their liberty without resistance," we do not think they are dead words from a forgotten time - but a call, an urging, to participate in transforming our world now.

Posted by ryan griffis at 4:25 PM No comments:

A St. Paul, MN suburb has had itself removed from Google Map's Street View feature, so you won't be taking any virtual tours there...
From the Star Tribune, via Space & Culture.
Posted by ryan griffis at 2:26 PM No comments:

In the Middle of Nowhere

For a while, this country’s geographic center bounced around the heartland like the ball on an old movie-screen singalong. When Alaska joined the union nearly 50 years ago, the government determined that the center — the theoretical balance point — had moved from outside Lebanon, Kan., to some inaccessible prairie here in Butte County, 439 miles to the northwest. (Fret not, Lebanon has adapted; it now calls itself the “Historical Geographical Center of the 48 States or the Contiguous United States.”)

Then, when Hawaii became a state soon after, the center moved again — just six miles to this spot, about 21 miles north of Belle Fourche, a small city of ranching and agriculture. The center of the nation was now a few dozen yards from what was then Highway 85; local officials gazed into the open pasture and saw visions of camera-wielding tourists, jammed parking lots, a Belle Fourche boom.

(via NY Times)
Posted by ryan griffis at 2:07 PM No comments: