Putting the Super back in Superfund

We just received an email from the folks atSuperfund365, that this Sunday (September 30) will be the 4th anniversary of the bankruptcy of the federal superfund, implemented in 1980 via the Comprehensive Environmental Response, Compensation and Liability Act (CERCLA).
They propose we all acknowledge this anniversary, and make sure that it doesn't go unnoticed. Here are their suggestions:
1. Forward this email to your friends and family. Circulate it widely.

2. Call your representative to tell him/her that the Superfund's polluter pays tax must be renewed. You can use this guide by Safe From Toxics. You can also read more about Hinchey's bill and Casey's bill.

3. Plan a trip to your local Superfund site. According to the Center for Public Integrity, about 20 percent of people in the US live within 10 miles of a site featured on Superfund365. Take a look at the list of 365 sites and find one near you. Visit the site (organize a group or go on your own) and remember to bring a camera. Upload your thoughts, findings and photos, which will then be included in the ever-growing archive of Superfund365!
Posted by ryan griffis at 3:41 PM No comments: 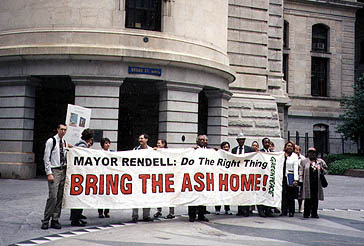 The Travel Office has been doing research on the geographic placement of toxic ash - from waste incinerators - and came across this initiative, called "Return to Sender", to bring ash back to Philadelphia from Haiti where it was dumped in 1988.
The Ash left Haiti in April of 2000, followed by an attempt to dump it on the Cherokee Nation, then an extended vacation off of the coast of Florida before being incinerated, yet again.
The continuing of colonization through waste - or what some call "waste imperialism".
Posted by ryan griffis at 9:37 PM 1 comment:

Touring the Digital Cabinet of Curiosities

Our friend Brett just sent us a link to this web site that features some pictures of a Lockheed aircraft plant that was camouflaged during World War II in anticipation of a Japanese air raid - at least that's the story on this web site. The host site looks like a virtual collection of, well, odds and ends of "interesting" things. We couldn't resist posting this because of the image of the parking lot. You gotta park, even in wartime.
After a quick search for more info, we found this other reference to the Burbank plant, with more detailed references and even a book.
Posted by ryan griffis at 10:16 PM No comments: 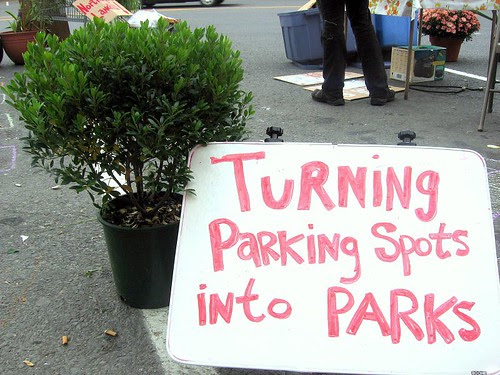 Check out Parking Day 2007 as documented by Flickr users.
Posted by ryan griffis at 9:35 PM No comments:


The Institute for Infinitely Small Things completed a performative research project in Chicago (for an exhibit titled Pathogeographies), interrogating the fear of "unmarked packages". And for anyone who has traveled anywhere in the last six years - by plane, train or... bus - the phrase "unmarked package" has a different connotation that its mere words suggest.
Posted by ryan griffis at 7:47 PM No comments:

Art and Unrest in the East Village

John Strausbaugh, of the New York Times, leads a video tour through New York City's East Village, looking at the remaining evidence of it's radical cultural and political past, through a more-than-slightly nostalgic perspective of sub-cultural and avant garde aesthetics. But it also looks at the significance of immigrant populations, the battles surrounding gentrification and the community gardens that sprung up in the Village's vacant lots. Worth a watch.
Posted by ryan griffis at 1:41 PM No comments:

The folks at Rebar launched a project a few years ago called Park(ing) that converted metered street parking into temporary public parks - feeding the meters for the maximum time allowed and rolling out grass and benches in the spaces.
Well, they've since taken the project national and are asking others to join in the process, by launching Park(ing) Day. Last year's launch in San Francisco and other international cities will be followed up by actions in more cities around the country, led by the Trust for Public Land. For anyone wanting to take part, they have a how-to manual available on their website.
When is this big day, you ask? September 21.
Posted by ryan griffis at 1:28 PM No comments:

Monbiot recently posted about the Climate Camp set up at Heathrow Airport. The Climate Camp (or Camp for Climate Action) is an organized effort by folks in the UK to simultaneously create a spectacle of protest and bring together discussions about climate crises. This got us thinking about the role of stasis in tourism, how there is often an expectation of temporary stability - a chance to camp, so to speak. Tourism is as much about the moments of not-moving as it is those fleeting moments of mobility. And so much of institutionalized travel is about creating environments, to the extent that a traveler can afford them, that are similar to those we inhabit while "at home." DVD players in automobiles, in-flight movies, first-class recliners on airlines...
What is more interesting to us however, is thinking about the other side of the politics of mobility - stasis. Much of the post millennium discourse on forms of political resistance focuses on the increase in mobility required to effectively protest global capital - moving through digital and social networks at speeds comparable to capital itself - but the language of civil disobedience has often revealed a significant amount of power in the act of not-moving as well. The sit-ins of the US civil rights/black freedom struggle, union picket lines, the tree sits and other tactics of Earth First! and even the arm lock blockades by contemporary protesters. This is not to counter the function of mobile actions (walk outs, etc) but to recognize the dual nature of mobility - movement only becomes meaningful when it's not there. Blocking things up is sometimes the only available means of dissent.
Camping is what you do between movements and once you get to where you're going. For those that are put in the position of permanent camps - those without permanent shelter in Los Angeles' "skid row" to the detainees at past and current internment camps - it is the institutional removal of mobility that makes inequities so visible, and why these "camps" are forcefully pushed to the margins of visibility.
Some associates known as Camp Campaign completed a project looking at just these sort of definitions of "camp", creating their own tour of camps across the US.
To get back to the initial spark that began this post, we are struck by the perpendicular development of affect visible in the actions of those desiring to alter our destructive institutions as well as in the actions of those very institutions. While the Climate Camp creates conviviality and protest through spectacular stasis, travelers passing through Heathrow will soon be able to get some atomized rest in the efficient luxury of the Yotel.
Image by Mike Langridge
Posted by ryan griffis at 10:36 PM 1 comment:

Some Travel Office promotional news:
There will be two upcoming Parking Public Tours in two locations.
1. October 12, Champaign, IL - beginning at the Springer Cultural Center in Downtown Champaign. Tour will leave sometime just after 6pm and should last approximately one hour.
2. November 9, Hollywood, CA - As part of the Just Spaces program at Los Angeles Contemporary Exhibitions in Hollywood. This tour will be co-led with Claude Willey and will begin at LACE at noon.
Note: Both will be pedestrian/walking tours.
Hope to see you there!
Posted by ryan griffis at 2:13 PM No comments:

Each day for a year, starting on September 1, 2007, Superfund365 will visit one toxic site currently active in the Superfund program run by the U.S. Environmental Protection Agency (EPA). We begin the journey in the New York City area and work our way across the country, ending the year in Hawaii. (We will need a beach vacation by then!) In the end, the archive will consist of 365 visualizations of some of the worst toxic sites in the U.S., roughly a quarter of the total number on the Superfund's National Priorities List (NPL). Along the way, we will conduct video interviews with people involved with or impacted by Superfund.

You can also subscribe to a daily RSS feed.
According to the Center for Public Integrity, 50 percent of US citizens live within 10 miles of a Superfund site, so most of us don't have to travel far to see one.
Posted by ryan griffis at 9:05 PM No comments: