Touring a Year in the Life of a Shipping Container 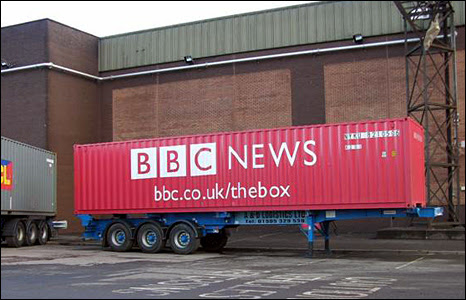 For the last year, the BBC has been tracking a shipping container as it travels the world. As it traverses the sea and land, reports on its status were logged: "Economic hardship greets the box in LA"; "Scotch wiskey exports buck downturn". But tracking the box has not been without problems, as the GPS tracking device installed on it has had to be repaired and, even after repairs, its signal has been intermittent. The story that this journalism-cum-locative media project points to however, is an extremely interesting and overlooked area where the economic crisis and global commerce intersect, at least it was for us.
As the BBC reports:

After 53 years of annual growth, the volume of cargo carried by container ships may record a fall in 2009. The May figures for westbound Asia-Europe services were down by a fifth on the previous year - an indication of the severity of the slump. The problems for the industry have been compounded by a boom in building large new container ships.

We're reminded of our favorite precedent to locative-media projects, the critical documentary project of Alan Sekula, particularly his expansive Fish Story and Lottery of the Sea projects:

It struck me that Smith (speaking of Adam Smith's "Wealth of Nations") introduces the concept of risk entirely through examples drawn from seafaring and sea trade: the sailor who risks all for meager pay, incommensurate with his skills; the wealthy ship owner who "insures himself" against risk by funding a fleet large enough to offset the inevitable loss of individual vessels. The concept of risk emerges with a measure of human sympathy and understanding, based no doubt on Smith's own life-world at the edge of the North Sea, that is completely absent from the musings of our contemporary apostles of the free market.

As is the case in Fish Story, I follow a meandering path from ocean to ocean, and from ocean to sea, but with different landfalls and departures. The film begins in Japan, moves to Panama and concludes in Spain, stopping first on the oil-fouled Atlantic coast of Galicia, and ending with the redeveloped Mediterranean littoral of Barcelona. Along the way, there are a number of detours, to the ancient agora in Athens and to the port of Piraeus, to a "millionaires' fair" in Amsterdam, to a number of demonstrations in different cities against neoliberalism and then against the war in Iraq. In each of these contexts, "risk" takes on new meaning, is refracted differently by circumstances. The narration asks a question: "What does it mean to be a maritime nation, to harvest the sea, or to rule the waves?" This is posed for the inherently unstable power relations of the western Pacific, but applies less literally to choices faced in Panama and Spain, choices having to do with sovereignty and our fragile dominion over the sea.

From an interview in Bomb Magazine
Posted by ryan griffis at 12:33 PM 1 comment: