Our proposal for an architectural addition to the iHotel Conference Center and a site owned by Ameren in Champaign, IL has finally been "released," meaning the poster and model of the proposal are currently on display in the iHotel. Below is a brief summary of the proposal, more info and images here.

...it is necessary to examine the social relations that the means of mobility afford and not only the changing form taken by the forces of mobility.
-- John Urry, Mobilities

For we live in the maps that the colonial surveyors bequeathed us.
-- Paul Carter, Dark Writing

One of the problems in studying "cancer clusters" - statistically high rates of cancer in a given area due to environmental conditions and contamination - is the increasing rate of migration of people over the course of their lives.
-- Richard Huggett, Fundamentals of Biogeography

The mMigration Research & Recreation Center will be a multi-use entertainment and educational facility serving the greater Champaign-Urbana area, and would be focused on various forms of migration. Multiple narratives of human, animal and geological movement in the region would be explored and documented through a media library housing videos, books, oral histories, photographs and digital archives.

The form of the mMigration Center will further visualize and encourage thinking about migration and mobility. Its primary facility will be prominantly located over the current iHotel and Conference Center South of the University of Illinois's flagship campus. Entry to the center will only be available through a satellite portal, located approximately 2 miles to the North, in a lot at the intersection of 5th and Hill Streets. From there an underground walkway and elevators will take visitors under the city and up to the center's 120 ft high facility.

The structure of the main building itself, hovering over the iHotel and Conference Center, is based on soil samples that document ground contamination of the lot at 5th and Hill Streets, where the entrance to the center will be located. This lot was once a manufactured gas plant that operated during the first half of the 20th Century, supplying lighting for Champaign and powering its interurban rail system.

Posted by ryan griffis at 3:35 PM No comments: 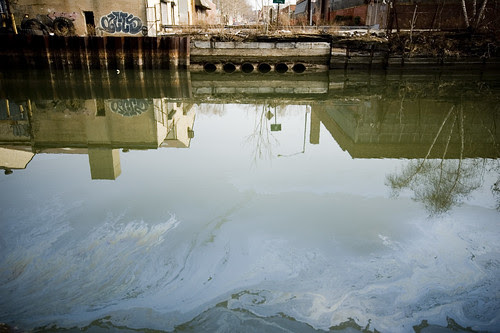 We were recently in New York, where we took a really great tour of the Flushing Meadows Worlds Fair site (Now the NYC-run F.M. Corona Park), and also checked out Damon Rich's intervention (as part of his exhibition Red Lines) into the Queens Museum of Art NYC Panorama, built by Robert Moses for the 1964 Worlds Fair. It's pretty spectacular on its own, but Rich's intervention provides a less utopian chapter in the development of the city - - mapping the geography of foreclosures onto the Panorama.
We also attended an event about the initiative to get the Gowanus Canal in Brooklyn designated as a Superfund Site by the US EPA. We won't go into that initiative here... readers can look into it more at the previous link, but we were inspired to make this post after reading a story in the New York Times about a "secret" (how secret can something in the NYT be?) urban pool made out of dumpsters. The pool is a project (dare we say, business venture) of a company called Macrosea, that appears to be a sort of avant garde development firm. Interestingly, one of its key partners (as Project Director) is artist and writer Jocko Weyland, whom some readers may recognize for his writing on skateboard culture, or for his contributions to the art-culture-intellectual curiosity magazine Cabinet. The NYT story on this much blogged about trendier form of dumpster diving discussed an after party for Cabinet magazine held at one such dumpter-derived swimming hole located in Gowanus, and featured sound bites from artists and curators like Nina Katchadourian and Aaron Levy. Macrosea is, along with their more lucrative ventures, working on plans for re-uses of strip malls, perhaps putting to practice the research of Julia Christensen's Big Box Reuse project. The story also alludes to the abundance of unused dumpsters as the result of construction lulls during the recession/depression.
Perhaps it's simply an indication of our reading art and culture sources, but the recent instances of artists colonizing economic misfortune in such parasitic ways (such as artists buying cheap houses in Detroit) is both interesting and troubling. This seems markedly different from what is generally thought of as gentrification. The construction of party pools for neo-bohemians out of dumpsters on vacant industrial sites next to a potential Superfund site merges the utopian and dystopian in a way that makes cynicism seem completely ridiculous. We think it would have been even better if the pools were made as party ships, complete with glass bottoms, so party goers could swim in fresh water (trucked in from a New Jersey aquifer, of course) while looking down through the murky, inhospitable canal below and the wreckage of capital all around.
image of the Gowanus Canal by Listen Missy!
Posted by ryan griffis at 11:52 AM 1 comment: