Article in the Atlantic Cities

The Temporary Travel Office's Ryan Griffis was interviewed for a piece on critical tourism on the Atlantic Cities. The article also includes our favorite critical tour guide, Chicago's Paul Durica of Pocket Guide to Hell Tours.

Thanks to Emily Badger, a great writer for the Atlantic Cities, who has covered other things like the geography of prisons, the impact of smartphones on public space, and how sparrows have adapted to the noisy environments of cities.
Posted by ryan griffis at 10:34 AM No comments:

One of our series of guided tours of surface parking lots focuses on the Wrigleyville neighborhood of Chicago. It's home to the cubs, out-of-control drunk people, and some pretty interesting parking lore (the local towing company angered Steve Goodman enough that he wrote a song about them). Part of our tour focused on the notorious 2008 Chicago Meter Parking Deal, where the city of Chicago leased all of its street parking operations to a private consortium (Chicago Parking Meters, LLC).

"The Deal" was riddled with questionable ethics, covered fantastically by the Expired Meter Blog and the Chicago Reader—Mayor Daley now works for the New York law firm that negotiated the deal between the parking consortium (led by Morgan Stanley). It has recently come back into the news following bills that the parking meter consortium has sent to the city, totaling $27 million. According to the Sun Times:

The $14 million bill stems from parking revenues the meter company says it lost when the city took meters out of service last year because of street repairs, festivals and other city-sponsored activities, according to documents obtained by the Chicago Sun-Times.
This is the second time in a year that the company has hit City Hall with a claim for a big parking tab. The Emanuel administration already is in arbitration over a $13.5 million claim over free parking that Chicago Parking Meters says it provided to people displaying disabled-parking placards or license plates in 2010.
That makes the total disputed amount more than $27 million.

This situation is enough to make someone build a giant Jabba the Hut sculpture out of parking machine receipts.
Posted by ryan griffis at 10:26 AM No comments:

We just opened our Temporary Embassy to the Riparian City of the Doan Brook Watershed at the Cleveland Convention and Visitors Bureau at Spaces. If you're in the Cleveland area, stop by Spaces and get your passport stamped, and check out the other fascinating ways to experience Cleveland provided by the Cleveland Urban Design Collective, The Think Tank That Has Yet To Be Named, Alison Pebworth, and Cleveland SGS (along with some other fabulous resources provided by the Spaces staff).

We also have lots of copies of the first guide book in our series Stories in Reserve! If you want to tour North America this summer, forget Disney World, the Grand Canyon and New York City! Wouldn't you rather see dentist offices in Tijuana, a military munitions manufacturing site-turned wilderness preserve in Southern Illinois, and a post-mega-event False Creek in Vancouver???

Posted by ryan griffis at 3:43 PM No comments:

Right to the Riparian City 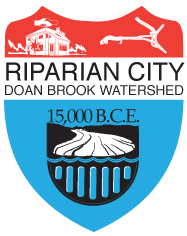 On May 11, we (the Temporary Travel Office) will open our proposal for a Riparian City in Northeast Ohio, focused on the Doan Brook Watershed. The watershed is the land draining into Doan Brook, a creek that runs through the cities of Cleveland, Shaker Heights, Beachwood and Cleveland Heights. Our proposal is to re-imagine the geo-hydrological territory of the watershed as political landscape inhabited by human and non-human citizens. To bring this imaginary territory to life, we will be offering passports from an embassy temporarily staged at SPACES (as part of their Cleveland Convention and Visitors Bureau) in Cleveland until July 13. We're also soliciting suggested landmarks and points of significance within the watershed via a large scale map and on the web.
We're really interested in the bioregional territory, not as a utopian gesture that promises harmony between humans and the larger ecology, but as a point of entry into the problematics of practicing a political ecology. Our political borders don't become less problematic just because they're delineated by geology.
Some related links:
Doan Brook Watershed Partnership
Mark Whitaker's Toward a Bioregional State blog
Libcom's discussion of stakeholder politics
Posted by ryan griffis at 9:48 PM No comments: