Tourism in the Era of Emerging Diseases

The US Department of Health and Human Services recently announced the US will begin compliance with a revised version of the International Health Regulations "designed to prevent and protect against the international spread of diseases while minimizing interference with world travel and trade." The original version, adopted in 1969 was design to combat the spread of cholera, yellow fever, smallpox and plague.
The new version is designed to tackle "new" health concerns, like smallpox, polio, SARS and human cases of new strains of human influenza, as well as potential biological, nuclear and chemical terrorist attacks. The DHHS press release goes on to say:

The regulations provide an algorithm to determine whether other incidents, including those of unknown causes or sources, may constitute public-health events of international concern, and as such must be reported to the WHO.

There's an algorithm for that?
On a related note... ever heard of Aircraft Disinsection? My spell checker hasn't.
Posted by ryan griffis at 4:06 PM No comments:

The Brave New Traveler blog has a post about volunteer tourism, providing a kind of how-to resource for those looking to do some philanthropic adventure traveling. Of course, this seems to focus on tourism in the more conventional sense, i.e. travel to more remote or distant locations (relative to where one is coming from), but it's also becoming a practice closer to home. Many people in the US traveled to New Orleans to spend some time rebuilding homes and businesses, for example, taking what the Washington Post called "working vacations."
While this is definitely an interesting way of repositioning the positive potential of travel and tourism, the new voluntourism is essentially a descendant of missionary work. Not to say that all missionary work is negative and necessarily proselytizing, but it certainly comes with historical baggage.
PBS recently featured a piece on voluntourism in Tanzania, and has a short list of related resources.
Posted by ryan griffis at 1:14 PM No comments:

[image from the CBC]
I recently came across a blog devoted to medical tourism, the practice of traveling to other location for medical care. There has been some media coverage of the recent trend of people in the US traveling to India and Thailand, for example, for special treatments and lower surgical costs.
A friend of the Travel Office (Ricardo Miranda-Zuniga) did an excellent project about US residents visiting dentists on the Mexican side of the border.
As the Wikipedia entry notes, however, medical tourism is not quite a new idea (they mention spa towns, and even an ancient Greek example). The ongoing history of women having to travel across state lines in order to receive an abortion could be a fairly recent example that also reveals that travel for medical purposes is not "simply" a tourist affair - especially since recent legislation makes this travel even more complicated and dangerous for many in the US. The Dutch-based Women on Waves provides a more international response to such juridical regulation of women's bodies.
With the US medical-insurance-nutrition industry being what it is, it's not surprising that lots of its citizens are touring to neighboring countries, both physically and virtually, for lower cost meds.
On another blog, and quite some time ago now, I posted before about the global trade in genetic material and what I called "fertility tourism," which would also include the geographic transfer of genetic material (human and non-human) from legally under-represented populations into the intellectual property banks of US and European biotech firms - what has been aptly called "biopiracy".
So where do all these different instances of mobility and health intersect? Access is probably a good place to start... but that's for another day.
Posted by ryan griffis at 1:43 AM 4 comments:

Much like my previous post about race, place and tourism, the institutionalization of the image of North American First Nations in leisure activities is laden with aestheticized and displaced narratives. Some friends of the Travel Office have been working on an extended project titled Driving East that looks at this confluence of mobility, leisure, history and stereotypes through practicing their own form of leisurely, yet critical, mobility. Below is from their recent announcement for an exhibition opening July 17th in Milwaukee (The image is from their Flickr set for the project):

The year 2007 marks the 175th anniversary of the Black Hawk "War", a 4-month military campaign by the US Army and Illinois Militia to prevent a band of Sauk and Meskwaki (Fox) Indians from returning to their village near the confluence of the Rock and Mississippi Rivers. While details of the conflict — including the slaughter of hundreds of starving Indians after they had attempted to surrender - may be little remembered, the mythology of Black Hawk permeates the upper Midwest and, indeed American culture at large. In Wisconsin and Illinois there are hundreds of Black Hawk place names, including state parks, churches, schools, roads, hotels, and dental offices, and several heroic sculptures. Meanwhile, Americans across the country — including the four million people who identify as Native American — may follow the fortunes of Chicago's NHL Hockey team, thrill to the action‒packed war film or Playstation game Black Hawk Down, or find themselves piloting an armored helicopter through war-torn airspace.

Seemingly about the 19th century Sauk leader Black Hawk, this project is, in fact, mostly not about Black Hawk. Rather, we are interested in the disconnect between Black Hawk as a symbol and Black Hawk as a historical person, and, more importantly, the disconnect between the Black Hawk War as a historical narrative inscribed in the landscape and the present day struggles of American Indian peoples and Nations in the midwestern United States. As white people, we believe commemorative processes and historical narratives continue to shape the physical, social, and political spaces we inhabit today with real and substantial consequences for how we view ourselves and others as fellow inhabitants of and travelers within the contemporary United States.

Driving East Through Indian Country
Driving East is a multi-year project exploring how myths of American mobility developed during Manifest Destiny continue to operate today. We use the familiar and lighthearted form of the road trip to rethink how the present-day landscape was forged by the very serious, linked processes of white westward migration on the one hand and Indian removal and resistance on the other. By engaging with the material culture of westward expansion and its commemoration, we uncover, recover, expose, and re-present traces of these histories still resonant in the landscapes and and present-day politics of a place.
Driving East Through Indian Country: Black Hawk Chapter is a project‒ based exhibition by Sarah Kanouse and Nicholas Brown of photos, videos, and texts gathered during the Cultural Crisis Residency Program in Milwaukee

Posted by ryan griffis at 11:21 PM No comments:

I picked up this CLEAR brochure in the Indianapolis Airport... so for $100 per year, Indy fliers can join the corporate control society, if you're not on a no-fly list anyway.
Posted by ryan griffis at 1:48 PM No comments:

Tourism, Preservation and Race in the US 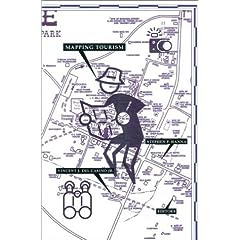 Related to an ongoing Travel Office project, I've been doing some reading into the intersections of historic and ecological preservation, tourism and race. Two books that I've discovered relatively recently, Black Geographies and the Politics of Place and Mapping Tourism, have provided a lot to consider.
In Black Geographies, Angel David Nieves' "Memories of Africville" looks at the black settlement known as Africville in Halifax, Nova Scotia through the disparate discourses of historic preservation and the reparations movement. One notable statistic Nieves uses: of the 76,000 properties identified by the National Register of Historic Places, only 823 are associated with African American Heritage. This is due largely to the fact that historic preservation is overwhelmingly based on notions of architectural integrity, meaning that preservation as an institution is biased towards building a record of architectural style and technology. Nieves' argues that "developing and alternative methodology adapted to grasp the multiple meanings of 'difference' in the North American cultural landscape and concurrently articulating a new model for historic preservation require new modes of interpretation." An argument is also made that for the creation of historical registers as an element of reparations. An unexpected and very interesting aspect of the text is how the debate between preservation and recreation has an effect on what is included in the historical record.
In Mapping Tourism, Owen Dwyer's "Memory on the Margins" looks at the politics of Civil Rights tourism, specifically the Alabama Civil Rights Trail. Dwyer analyzes the aesthetic of the map created for the trail, and how it positions Civil Rights as a "won cause" that took place in isolated Southern Cities, privileging streets, pulpits and courtrooms at the expense of homes, neighborhoods and citizenship schools. This division, according to Dwyer, represents a marginalization of the role of women in the black freedom movement. The discussion focuses on maps, institutions and literature that serve as gatekeepers, controlling access to sites and their histories. The Student Nonviolent Coordinating Committee, for example, is not recognized by the Alabama trail, despite its central role in the movement. Dwyer writes:

The symmetrical authority of maps and monuments - in one case generated via claims to scientific accuracy, in the other by recourse to weighty materiality - stands in stark contrast to the inherent instability of the messages they bear... this contrast between apparent fixity and radical impermanence accounts for the political value of maps and monuments as representational capital.

This interpretation of the value of maps and monuments is what drives the Travel Office's continued interest in tourism as a site of analysis and intervention.
The US National Park Service's Cultural Resource Management publication contains some official analysis and policy positions that are of interest here, especially Antoinette Lee's "Cultural Diversity and Historic Preservation."
Posted by ryan griffis at 12:38 PM 1 comment:

I just received an announcement from the wonderful LA Urban Rangers about two safaris they will be leading of Malibu's Public Beaches. Here's their description:

Tired of Zuma and Surfrider? Want to find and use the other beaches in Malibu? The twenty miles that are lined with private development? The "Malibu Public Beaches" safaris will show you how to find, park, walk, picnic, and sunbathe on a Malibu beach. Each 3 1/2-hour safari visits two or three beaches and explores natural history, jurisdiction, and the identification of public and private property. Skills-enhancing activities include a public-private boundary hike, an accessway hunt, sign watching, and a public easement potluck.

The BBC Does Globalization

The BBC has quite a good resource for current events and some analysis of globalization.
Posted by ryan griffis at 7:33 PM No comments: