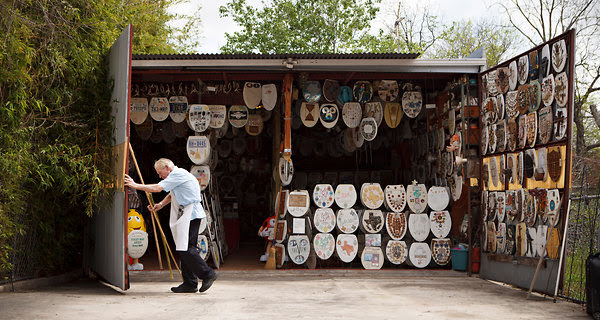 The New York Times has a great short piece about odd museums in Texas. Not all of them are in homes and garages, but those sound the most interesting to us. It begins with the Devil's Rope Museum, a tribute to barbed wire, but other local collections include:


classic-rock eight-track tapes from the 1970s (the Eight Track Museum in Dallas), their bugs (the Cockroach Hall of Fame Museum in Plano), their cars (the Central Texas Museum of Automotive History in Smithville), their sports (the Texas Basketball Museum in Carmine) and their toilet seats (Barney Smith’s Toilet Seat Art Museum in San Antonio). The state has numerous established, well-financed museums that are members of the American Association of Museums in Washington — the Museum of Fine Arts in Houston, the Museum of Nature and Science in Dallas — but there are dozens of others that exist as museums because someone put up a sign saying so.

Image above: Michael Stravato for The New York Times, The Toilet Seat Art Museum of Barney Smith, 90, in his San Antonio home’s garage.
Posted by ryan griffis at 5:16 PM No comments: