Adventure Tourism in the Colonial Present 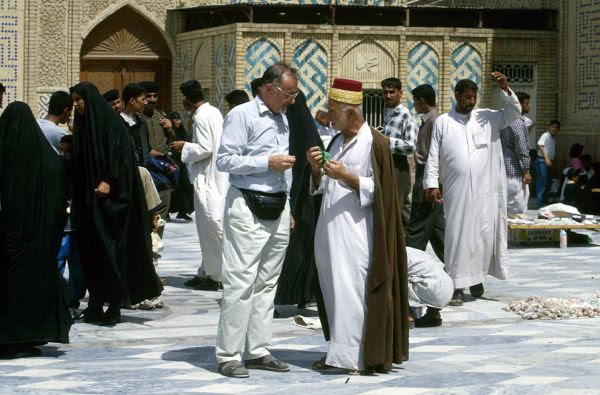 We're currently reading Derek Gregory's The Colonial Present, so the recent NY Times story and video on the development of tours in Iraq was particularly interesting. Gregory's historical analysis of the "war on terror" and its ideological foundations as ultimately colonial in nature (especially as it continues and reanimates Eurocentric Orientalism) got us thinking about the development of commercial tourism in this geography of the colonial present.
The statement from the first gentleman interviewed in the video, essentially that his favorite trips have been based on State Department warning lists, is echoed in the question posed to readers by the Times: "What is the most dangerous place you have ever traveled to?" Some of the comments point to what could be considered obvious places for US-based tourists: Uganda, USSR, Vietnam, Albania, North Korea...
But some people made some interventions into such expectations - suggesting that Detroit, Philadelphia, Houston, Jersey City. Of course, such interventions mostly followed the conventional depiction of urban centers (especially where there is a relatively large non-white population and/or large disparity in wealth distribution). One Berliner's comments sum up this sentiment:

Most terrifying experiences I had visiting San Francisco the multiculture city of love in the 90ies.
Iraq is changing and although I would not go there on my own I am pretty sure that you are much more safe on a well organized tour in Iraq then in some quarters in US cities (to be fair this goes for other cities like Paris ot Rio too)

These comments reveal the colonial present within the local spaces of empire, but are rarely called upon as authentic in the same way. They remain spaces that have simply resisted control and management, or perhaps more accurately that have been abandoned by colonial interests, except for attempts to cordon them off as much as possible until they're needed for something else.
The travel company featured in the story, Hinterland Travel, offers packaged tours through Iraq, Afghanistan, Burma, Kashmir and other contested spaces. There may be something useful in a comparison of adventure tourism in spaces of extreme military intervention and the "internal" spaces of organized abandonment. We're not sure yet...
Image above from Hinterland Travel
Posted by ryan griffis at 2:15 PM No comments:

After reading the NY Times story on the Working Families Party sponsored tour of bonus-receiving AIG executives' homes (such as Douglas L. Poling, who allegedly received the largest bonus of $6.4 million), we thought there had to be some other people who have written about "Shame Tourism".
There are lots of examples: Michael Moore's Roger & Me, a documentary travelogue of his quest to find and confront former GM Chariman Roger Smith, followed by all of his other similarly shaming film and television antics; various instances of activist organizations like the San Francisco Bay Area Toxic Links Coalition's Cancer Industry Tour; and of course, it relates to the age old protest tactic of taking the complaints to the door of the oppressor.
Like other forms of tactical tourism (e.g. toxic tourism), shame tourism is about located witnessing, conditioning our view of something through an experience in a place. Where toxic tourism locates the abject in spectacularly polluted landscapes, shame tourism locates the abject in morally compromised individuals and companies. The visible disparity between the wealth of the exectutives and the economic hardships of the tourists, shifts from jealous admiration (that is the basis for the Lifestyles of the Rich & Famous and tours of celebrity homes) to moral outrage. As in toxic tourism, a major rationale of these tours is to draw attention to the spatial aspects of inequity and conflict - it's easier to confront something/someone if you know where they live. And the tourist act marks these spaces/places as somewhat "public", at least open to public (re)viewing.
But a more usful tour might link the homes of AIG exectutives with those of legislators who own AIG stock. Or maybe with the myriad other businesses that are AIG's lenders. The questions for us are, "How can the shaming of exectutives also add to our spatial understanding of economic inequity? What are the missing components that can be added to the itinerary? And what do we do when the causes of inequity are impervious to shame?"
Image above: activists/tourists pass the home of James Hass, an AIG executive, Saturday, March 21, 2009 in Fairfield, Conn. From AP Photo/Douglas Healey, via the Huffington Post
Posted by ryan griffis at 4:18 PM No comments:

With the 2010 Olympic Games bulldozing ahead in Vancouver, we've been trying to keep up with the news surrounding resistance there and in the other upcoming host cities of London and a likely Chicago.
We just watched The Five Ring Circus, a story about resistance in Vancouver to the 2010 Winter Games, specifically focusing on the environmental battles at Eagle Ridge and struggles over housing in the city. The film portrays a diverse group of citizens engaged in direct action, from squatting evicted low-income hotels and apartment buildings to campers blocking the construction of roads to vocal protests at city council meetings.
One thing that we were surprised was left out, however, is the claims of indigenous communities, specifically that a good deal of the province of British Columbia is actually non-surrendered Native lands.
Just a few days ago, on March 8, indigenous protesters disrupted an Assembly of First Nations meeting where tribal bureaucracies were apparently making deals with Olympic organizers and developers.
The BBC, as part of it's Building the Olympic Dream series, featured a story about resistance to development around the historic (going back over 100 years!) Manor Garden Allotments in Hackney Wick. The area would be surrounded by the proposed Olympic Park.

Meanwhile, down the road to the speculative 2016 games in Chicago, the problems of that campaign are becoming more and more visible in the media. Just today, the Tribune ran a story about controversy surrounding the improvement of select roads in preparation for an early April visit by the International Olympic Committee.
Philip Hersh over at the LA Times Sports Blog, has an interesting post about the IOC's threats to the Chicago bid over the ratio of revenues shared between the IOC and the USOC. Basically, the IOC is threatening to withdrawing its revenue sharing contract with the USOC unless it agrees to a cut in its share. Hersh points out that the USOC probably holds an advantage when it comes to holding sway with the largest advertisers, i.e., as goes the USOC, so goes Coca-Cola. While we think Hersh's main point is largely irrelevant - we don't think either the IOC or the USOC should be getting ANY revenues at the expense of anyone - it only goes to point out what the Olympic Games are all about from the get go.
We hope that orgs like Communities for an Equitable Olympics 2016 get more coverage as the likelihood of Chicago winning the bid becomes larger. But we also don't put much weight on promises for community benefits. Games after Games have revealed the willingness of host cities to reneg on any and all promises.
Posted by ryan griffis at 10:23 PM No comments: