Automobility Before the Civil Rights Act

The New York Times ran a recent piece on the "Green Books" that once served as travel guides to North America for black Americans. The books (fully titled "The Negro Motorist Green Book") was published by Victor H. Green, a NY postal worker, from 1936 until the passage of the Civil Rights Act. The book is an interesting artifact on many fronts. It is simultaneously an indirect document of the everyday violence and exclusion faced by black Americans and of the desires for mobility. It also shows how the growing domestic tourism industry was seen as potentially interested in black tourism as a growth market—see the ad below asking potential service providers if they are represented (and if the clip art is not taken for granted, these service providers would have been white businesses). 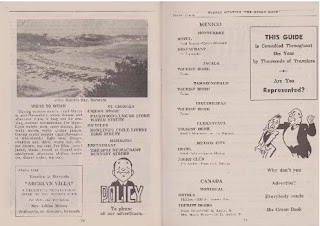 The byline near the bottom of the cover, "Carry your Green Book with you. You may need it." is an unmistakable warning to those considering travel without a guide to refuges and accommodating businesses. While white travelers consumed auto-guides to the growing national park system (now linked by the expanding highway system), the "wild" for black tourists was white-ruled society itself. The 1964 Wilderness Act, passed on September 3, that created a system of wilderness areas "administered for the use and enjoyment of the American people..." would have only recognized the full rights to enjoyment of black Americans by two months, the Civil Rights Act having just passed in July.
Of course, the equitable implementation of those rights was/is another matter.
A PDF of the 1949 edition is available for download and an exhibition titled the Dresser Trunk Project looks further at the realities faced by black travelers in the US during segregation through sculpture (a downloadable catalog is also available for the exhibition).
Posted by ryan griffis at 5:55 PM No comments:

The latest newsletter from the National Parking Association highlighted yet another example of a parking structure incorporating a "green" energy feature (the last example was a surface lot with solar panels). This time, it's a garage in Chicago with a wind turbine. A description from inhabitat.com:

We wonder if finding a way to convert political corruption into alternating current might be the ultimate source of renewable energy for the city (and possibly the entire state of Illinois), but wind will have to do for now.
Posted by ryan griffis at 11:11 AM No comments: