Traveling Through the Corridor of Radical Midwest Culture 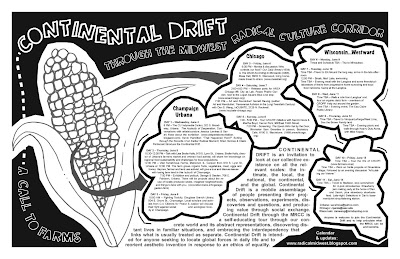 Posted by ryan griffis at 11:49 PM No comments:

via the New Economics of Tourism (blog of the Centre for Tourism and Cultural Change (CTCC) at Leeds Metropolitan University).
Posted by ryan griffis at 9:35 PM No comments:

The NY Times has an interesting piece on local resistance to a local measure in Los Angeles that would force taco truck to change location every hour. In the Times article, the debate becomes one about authenticity, at least for those who want to get rid of the trucks. As one East LA business owner, who thinks the trucks are a blight on the community, says, "People say this is part of our culture. I don't recall any towns in Mexico having taco trucks."
One thing this makes us wonder about, is the recent upsurge in food prices along with the cost of gas... what is the future of taco trucks, and those that depend on them, in an era of commodity food prices and four-dollar-plus gasoline?
Posted by ryan griffis at 1:16 PM No comments:

Although the State of Florida and the City of Jacksonville have decided to continue overlooking the 44 year old murder of Johnnie Mae Chappell (a focus of the Travel Office's Guanabacoa Trail), the FBI has apparently been considering it one of their top 5 unsolved cases from the civil rights era. Reports about a documentary on the murder, by filmaker Keith Beauchamp (maker of the Emmy-nominated “The Untold Story of Emmett Louis Till”), have been showing up in lots of Jacksonville media and national outlets, and Chappell's murder was featured in Oprah's show on the 40th anniversary of MLK's assassination. Interestingly, Beauchamp recreated the scene and events of the murder on site in Jacksonville, and has been cooperating with the FBI's investigations into the case.
Of course, one has to wonder, if the FBI's investigation does actually deal with the obviously racist and illegal manner in which the original investigation was handled, will it also deal with the obvious continuation of such problems in the current city and state's legal avoidance of that historical legacy?
Posted by ryan griffis at 12:46 PM 1 comment: